Prior to Hurricane Katrina, I always had a fascination with hurricanes. Many evenings would be spent watching the approaching storms on various news outlets. Waiting for Hurricane Katrina was no different but as we know now that storm was different. The unbelievable destruction and loss was unimaginable to me. I had never been to New Orleans nor did I have any ties to the city but always knew it was a place I wanted to visit. I wondered if that would ever happen after Katrina. Little did I know that my visit would come in the form of a volunteer opportunity a year later. 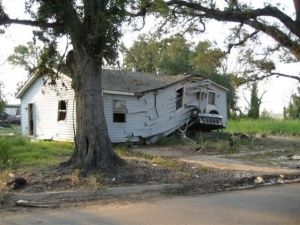 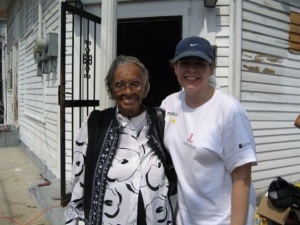 We had no idea what to expect when we arrived in New Orleans but quickly learned the impact of Katrina on a bus tour of the city and it was overwhelming. Street after street had been destroyed. Some yards only had steps left that homeowners once climbed to get into their homes. We saw houses that were no longer habitable, no birds, no bushes, no flowers, dead trees everywhere. The X’s that marked homes searched still remained. Katrina and the flooding were indiscriminate and everyone had a story to tell. I cannot tell you how many times people thanked us for coming to volunteer.

The volunteers were given opportunities of where they might like to help. As a lifelong foodie, I felt a calling to help at Willie Mae’s Scotch House Restaurant located in the Treme area of New Orleans after seeing this short film http://youtu.be/3uVUNpkvAiA. Miss Willie Mae Seaton had been making the best fried chicken in New Orleans for over 50 years and had received a James Beard Award in 2005 for it. Many well known Southern chefs including John Besh and John Currence worked endlessly to get her back up and running. In the sweltering heat, we scraped, sanded and helped paint to get her back into her kitchen cooking her secret recipe where she belonged. I had never been that dusty and dirty in my life but loved every minute of it. I had the amazing opportunity to meet Miss Willie Mae and was touched by her incredibly warm spirit, smile, her stories and that southern charm – “all you pretty, pretty girls”. She shared some of the reasons for her success – be nice to everyone and to always be real. Wise words from a beautiful woman who I was lucky to meet and help. While her great granddaughter Kerry is now at the helm, I was happy to be able to return two years later to see the restaurant completed and got to enjoy the fried chicken and other southern treats. They were worth the wait.

The last few days I find myself remembering ten years ago. I wonder what happened to the many people who stories we would come to know on television. It also brings back many amazing memories about what a group of volunteers can do in such a short time yet make such an incredible and lasting impact. I left New Orleans with a sense of faith, hope, energy, new friendships and accomplishment. New Orleans and their residents definitely captured a place in my heart that will remain forever.